I’m a tea obsessive. I carry bags of loose tea on business trips and judge restaurants by the breadth of their selection. I know the names of specific gardens in Darjeeling, India, and age cakes of Pu-erh in my wine cellar.

Still, I never thought I’d be tramping through rows of Camellia sinensis atop a mountain in southeastern China, beside one of the world’s master tea growers. It took me two flights from Hong Kong, already on the far side of the world from home, and two days of waiting for Liu Guo Ying to lead me on an hour-and-a-half-long hike—up a slope that would have seemed steep to a mountain goat—to tea gardens that few outsiders have ever seen

I was there in search of the terroir of my favorite tea, just as I’ve flown around the world to see vineyards and meet winemakers so I can better understand my favorite wines. The journey started at a tearoom in a strip mall in Tucson, Arizona, where I tasted a da hong pao, a type of oolong , that altered my tea-drinking life. In the same way that Montrachet is a particular kind of Burgundy from a specific vineyard in France, da hong pao comes from a single source: the stony slopes of Wuyi Mountain. It’s rare, expensive, and frequently counterfeited, but this one was authentic. It tasted as autumnal as Thanksgiving dinner, with the sweet balsamic flavors of grilled peach. And it kept getting better—richer and rounder with every cup.

By the time I’d finished the pot, I’d formulated a mission. I’d fly to China to meet Liu, the man who, I was told, had grown this extraordinary tea. Liu is a rock star in the Chinese tea world, the only grower to be awarded a citation by the government for innovation in a traditional art. I wasn’t sure what I was hoping to learn from him, or even how we’d communicate. Nevertheless, I booked a ticket that night.

Tea is the most frequently consumed beverage around the world other than water, a $6.5 billion industry in the United States alone, according to World Tea Expo. It’s also a cultural icon with innumerable local variations. There are postprandial mint teas poured with a flourish in North Africa, milky concoctions served with scones and jam on British afternoons, energizing matés brewed in the Andes, sweet teas sipped at lunches in Savannah, Georgia. In the Middle East, serving tea to a stranger is a gesture of hospitality. In Japan, it has a formal ceremony. And the aroma of a tea can bring back a memory as surely as a photograph.

Not long ago in most American households, tea carried about the same importance as mayonnaise: everyone kept some around, but rarely gave it a thought. The idea of visiting a shop specializing in tea, let alone making a pilgrimage to the source of a particular variety, would have seemed bizarre. But like beer, coffee, and chocolate before it, tea has leapfrogged from near-commodity status to something close to a fetish. There’s loose tea, tea bags made of silk and shaped like pyramids, teas that look like they came off the set of Indiana Jones. Tearooms and boutiques have sprung up. Specialty websites flourish, selling esoteric varieties to a coterie of devotees. A flurry of new brands has appeared on grocery shelves, bearing designations such as organic, fair-trade, and single-source. From Celestial Seasonings hippie, tea has gone Williamsburg hipster.

Teas fall into one of two categories. Many are blended with other ingredients, such as orange blossoms or sakura cherry petals. Others are pure Camellia sinensis; as with wine, their characteristics are largely determined by where and how they’re grown, not what they’re combined with. The ones I like best, like da hong pao, taste as if the place they’re from is the only place they could ever be from.

Until recently, the millennia-old Chinese tea industry was tightly shuttered, even more than the country as a whole. Tea regions were mostly closed to foreigners. Lately, though, an outward-looking China has been marketing its cultural patrimony, and tourism to tea-growing areas is encouraged. So when I arrived in Wuyishan, a city of 224,000, for the sole purpose of drinking tea, Liu understood. He met me at the airport, then drove a long way up a narrow road to a restaurant that resembled a south Texas barbecue shack. There were rickety wooden sheds connected by planks in the overgrown grass, not your usual setting for a Rabelaisian feast.

But that’s what we were served. We had venison with celery root, tiny river shrimp stir-fried with chives, duck soup with ginger, bowls of shimmering noodles. The only thing missing was tea. I kept expecting to see a pot materialize, as at every Chinese restaurant back home, but it never did. Finally, I asked if it was possible to have some oolong , since that’s why I’d come so far.

Liu’s daughter, who was serving as my interpreter, didn’t even inquire. In Wuyishan, tea is not served after meals at restaurants but at special teahouses, and we were miles down a dark road from nowhere. “You’ll have some tomorrow,” she said with a smile. “Everything will be okay.”

I went back to my hotel room and dreamed of tea.

Wuyishan is framed by a range of mountainous spikes and spires. Vistas are breathtakingly beautiful, not in the misty, water-colored way that I expected from China, but rugged, dramatic, all angles and no curves. Walking its streets, I couldn’t shake the feeling that I could have been in Burgundy or Chianti, with tea in place of wine. There were tea shops on every block, sometimes four or five in a row. Large metal teapots sat atop buildings, announcing them as tea factories.

Even though I didn’t speak the language and couldn’t grasp the customs, I felt like I fit in perfectly. At home, in the world of coffee drinkers, I constantly have to explain my intense interest in tea, but in Wuyishan it seemed like the entire population could tell a Pu-erh from a Lapsang souchong at a glance. Even the teas at my hotel’s ample breakfast buffet were distinctive.

Outside my window, Wuyi Mountain looked like a pile of rocks balanced by a child. Each time I looked up, I expected to see it tumbling down. I wanted to hike to Liu’s gardens, but Liu is more than just a tea VIP. He’s a hardworking farmer, a businessman, a marketer. He had things to do.

Instead, a young tea master named Wu Jianming, whom I’d met at dinner, proposed a drive to Tongmu Village, an hour away. Black tea was invented there during the Ming dynasty, in the 1600’s, but these days Tongmu is known best for Lapsang souchong , which is produced in triple-decked wooden factories. Wet branches are set afire at the bottom and smoke wafts up to leaves drying on a slatted floor above, much as scotch is flavored with burning peat. The tea has a reputation as a powerhouse, but Wu’s are rendered as delicately as possible. When I sipped one and rolled the flavors around, it had the finesse of a violin concerto.

“My generation was the first that has traveled extensively inside China,” said Wu, who is 31. Visiting Yunnan and Anxi, he learned techniques for firing and processing tea that his predecessors would only have heard about, and brought them home. We sat beside a golden statue of Buddha in his office across from the factory and sipped one remarkable tea after another, including his jin jun mei. Made from the buds of the plants rather than the leaves, it has only existed since 2007 and is nearly impossible to get outside of China. It tasted of chocolate and plums and roses.

Finally Liu arrived at my hotel. We drove to Wuyi mountain, then walked under a ceremonial arch. We passed a nunnery and a golden temple glistening in the sunshine. Then we started up the hill. We passed painstakingly maintained tea gardens with leaves and small white flowers, but authentic da hong pao, Liu explained, comes from the top of the mountain. He pointed in a direction that seemed almost straight upward.

We proceeded higher and higher, up steep paths, staircases cut into the rock, even the sheer side of a boulder. I was panting, but Liu, a heavy smoker, flitted like a gazelle. We arrived at the top and turned left along the crest, then emerged into a clearing. Liu spread his arms. “Da hong pao,” he announced.

It looked unprepossessing, just a field of shrubs in stony soil, but I knew that somehow it was unique in the world. I quizzed Liu about hours of sunlight, about wind exposure. He listened patiently, but my line of inquiry baffled him. It was the mindset of a Westerner, a wine-drinker, a fact-seeker. Da hong pao tastes the way it does, he said, because it’s da hong pao. To him that was explanation enough.

That afternoon we sat at a hand-carved tea table in his studio on Baihwa Road and drank cup after cup. I recognized it as the tea I’d had in Tucson, but fresher and brighter, with more smoke, more notes of grilled peaches, more power. It was da hong pao transmitted in high definition. I’ve rarely drunk anything better.

Which leads me to the last thing I learned in Wuyishan. Unlike wine, which is a finished product in the bottle, the taste of tea depends on the skill of who’s brewing it. The temperature of the water, the ratio of water to tea, the length of time that the tea is infused—all have an enormous impact on what ends up in the cup. I’ve known for years that preparing tea incorrectly—steeping a delicate green in scalding water, for example—can greatly detract from my enjoyment of it. But I never realized that the way you brew a tea can actually make it better.

Liu is not only a master tea producer but a highly skilled tea maker, an art in itself. Though I might have Liu’s tea again, I’d probably never have it like this. With each infusion, it became nuttier, woodsier, more interesting. When I stood up, I felt as addled as if I’d been slugging whiskey, yet my mind had a remarkable clarity. It was a sensation unlike any I’d experienced. I asked if that was a feature of da hong pao and Liu grinned.

Robert Rex-Waller, the tea sommelier at the Park Hyatt Washington, D.C., offers his picks from around the world.

India: CTC Assam
This Assam has a rich amber color and chocolate notes.

China: 1978 Vintage Pu-erh
One of the few teas sold by vintage, it “still has the flavors that the original tea masters intended.”

Taiwan: 2010 Dragon’s Fog
The “perfect example of a Taiwanese oolong,” bright green and milder than the Wuyishan version.

Before you sip maté and genmai cha with the locals, make sure you know the intricate rules of the game.

Japan: While it is not offensive to add milk and sugar to your tea, you should taste it in its purest form before doing so.

England: After stirring, place your spoon on the saucer behind the cup, its handle pointing the same way as the cup’s.

Argentina: Don’t use the straw (called a bombilla) to stir maté—the leaves floating on top should stay dry.

Morocco: When drinking tea with a shopkeeper, don’t talk prices—or business of any kind—until the glasses are emptied.

China: Express thanks to your server by tapping your index and middle fingers lightly on the table twice.

India: It is considered polite to decline an offer of tea, at first. Accept only after letting your host insist. —Nikki Goldstein 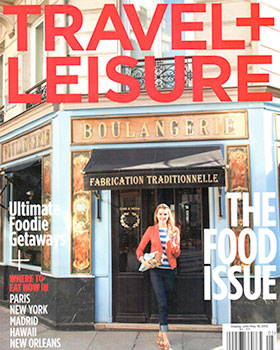 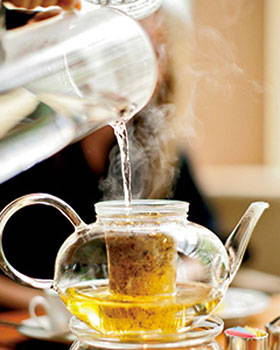 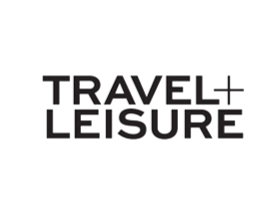 The Barbara Barry Script – Inside Design