Free Gift with Purchase Over $125 This Weekend Only. Limited Quantities Apply. See Details

Terms & Conditions
Offer is open only to legal residents of the 50 U.S. (or D.C.) states and legal residents of Canada. The Offer is subject to all applicable federal, state, provincial and local laws and regulations and is void elsewhere and where prohibited by law.

Early access offer valid from 12:01am Pacific Time ('PT') November 24, 2022 and ends on 11:59pm PT November 28, 2022. Early access is given to select customers chosen by TEALEAVES based on specific criteria and will be notified via newsletter@tealeaves.com. You must be logged in to your TEALEAVES.com account in order to be eligible to redeem your free gift.

Free gift will be automatically added at checkout before taxes and shipping costs - no code needed. Offer limited to the first 400 customers only. Offer not applicable to and applicable purchase amount does not include the purchase of eGift Cards. This promotion cannot be combined with any other offers or previous purchases. Free gift is non-transferable and no cash value. Limit of (1) per customer.

Terms of Offer are subject to change. TEALEAVES reserves the right to cancel, suspend and/or modify or adjust any orders due to unauthorized use of our website or violation of our Terms of Use or if there is any fraud, civil unrest, outbreak of widespread illness, technical failures (including but not limited to malfunctions, interruptions or disconnections in phone lines or network hardware or software), human error in the administration or processing, or any other factor that impairs the proper functioning of the Offer, as determined by TEALEAVES in its sole discretion.

TEALEAVES reserves the right to cancel, modify or terminate the Offer at any time without prior notice.

Any attempt by any participant to obtain more than 1 reward by using multiple/different email addresses, identities, registrations or any other method will void that participant's interaction and that participant may be disqualified from the Offer. Any use of robotic, repetitive, automatic or similar methods will void all registrations of that participant. TEALEAVES reserves the right, in its sole discretion, to disqualify any individual it finds to be tampering with the Offer or operation of the Offer. Any attempt by any person to deliberately undermine the legitimate operation of the Offer may be a violation of criminal and civil law, and should such an attempt be made, TEALEAVES reserves the right to seek damages from any such person to the fullest extent permitted by law.

By participating in the Offer, participant agrees to release and hold harmless TEALEAVES, Qi Botanical Tea (Canada) Ltd and their respective related companies, subsidiaries, affiliates, suppliers and agents from and against any claim or cause of action, including, but not limited to, personal injury, death or damage to or loss of property, arising out of the participation in the Offer.

All issues and questions concerning the construction, validity, interpretation and enforceability of these rights and obligations of the participant and TEALEAVES in connection with the Offer, shall be governed by, and construed in accordance with, the laws of the Province of British Columbia, without giving effect to any choice of law or conflict of law rules, which would cause the application of the laws of any jurisdiction other than the Province of British Columbia in Canada.
Now reading: High Time for Tea
Share
PrevNext

From the moment of its discovery nearly 5,000 years ago to the rituals observed today during the afternoon ceremony, the world has cultivated an eternal love affair with tea. Originally grown for its medicinal benefit, consumption quickly elevated to an art form that continues to offer both historical and cultural importance that is unsurpassed.

Chinese Emperor Shennong discovered tea in 2737 B.C. while stopping to rest on the roadside during his travels. Dried leaves from a nearby plant wafted into his pot of boiling water, and Shennong found the result to have a refreshing taste and pleasant aroma. Heralded the “Father of Chinese medicine,” Shennong implored his people to grow the plant for therapeutic purposes. During the 3,000 years it took for tea to become popular throughout the Chinese empire, consumption greatly influenced Chinese culture and embedded itself in every aspect of society.

Lu Yu wrote the first definitive book on tea. The “Ch’a Ching,” or “The Classic of Tea,” detailed the origins of tea and codified tools and methods for harvesting, preparing and serving the hot beverage. Yu’s tome greatly influenced Zen Buddhist missionaries, who developed and perfected the chanoyu, or Japanese tea ceremony, and elevated the consumption of tea to artistic fashion.

Although on its surface the chanoyu encompassed little more than notes for making and serving tea, the ceremony required polished service distinguished for its perfection, grace and charm. Much like its inception into Chinese culture, tea service in Japan grew from the imperial realm to the rest of society. Teahouses flourished, and geisha added the tea ceremony to their repertoire.

In the early 1500s, Europeans began to sail abroad in search of trade routes, and by 1557 Portugal had established trading stations, enabling a monopoly on trade between China and Japan. During the first commercial trading trip between Portugal and China, a Portuguese Jesuit Father became the first European to experience tea. He took his discovery home, and tea became an important part of Portuguese daily life. The Portuguese custom of drinking tea would prove crucial in bringing the rich tea traditions to England during the reign of King Charles II in his marriage to the Portuguese infanta Catherine de Braganza in 1662.

Although tea first appeared in Britain around 1658, Charles’ marriage laid the foundation for the British tea trade and made tea the most popular drink of English society. Catherine’s dowry, the largest in recorded history, granted England permission to use all ports in the Portuguese colonies in Africa, Asia and the Americas, thus providing England direct trading rights to tea. The wealthy adopted Catherine’s adoration for tea, and before long tea replaced ale as the national drink.

The Victorian period of the 19th century cemented the rich customs and traditions afternoon tea embodies today. As prices on tea dropped, the indulgence once reserved for the upper class became an affordable indulgence for the working class. One of Queen Victoria’s ladies-in-waiting invited friends every afternoon for tea and assorted sandwiches, buttered bread and sweets, a habit embraced by other hostesses. Afternoon tea, or “low” tea, occurred between 3 and 5 p.m. and placed emphasis on presentation and conversation, as well as filled a gap between meals.

A descendent of Dutch aristocracy, Mrs. Astor earned the title of “Queen of New York society.” Known for her lavish entertaining, Astor served as a pioneer of America’s high society.

TEA AT THE ST. REGIS

Throughout its history, The St. Regis Houston has remained the venue of choice for afternoon tea. From the moment of arrival, the reason is conspicuously apparent. Before entering the hotel, greetings flow from the valet and doorman and continue into the lobby with a welcome from the concierge. A warm reception from the tea butler at the entrance to the tea lounge further confirms the very essence of the St. Regis brand— uncompromising in its pursuit to create the best experiences for its guests.

Exclusively designed for afternoon tea service, the tea lounge resembles an elegant but inviting living room, one sure to put even the most anxious tea novice at ease. Guests may relax on a couch by the fireplace or at a bistro table closer to the afternoon’s entertainment. A live harpist accompanies every afternoon tea. The tea lounge seats 25 comfortably, the perfect number for a mixture of clientele, be it two friends catching up, a daughter’s first tea with her mother, bridal and baby showers, or businessmen in negotiations.

The St. Regis Houston’s tea butler Judy Solorzano believes that afternoon tea is all about the experience. “The tea lounge here at St. Regis Houston is the place to celebrate milestone moments,” Solorzano explains. “Afternoon tea makes the milestone complete. Tea is all about taking yourself away from the reality of the day for an afternoon to relax and enjoy a custom experience.”

Solorzano and Fortier both contribute to the timeless tradition of unparalleled perfection. Although she has only been with The St. Regis Houston for a year, Solorzano studied hotel management at Les Roches International School of Hotel Management in Bluche, Switzerland. The school ranks No. 2 among all international hospitality management schools in the world. In 2012, she will obtain her certification as a tea master, an accomplishment that requires intense training in the history, customs and types of tea. Fortier has more than 20 years of experience in pastries and has worked at The St. Regis Houston for eight years. Originally from New Orleans, most of his training has been in the hotel industry.

The St. Regis Houston offers 22 types of tea with additional seasonal blends throughout the year. An outside company provides the hotel with the high-quality blends. The tea company also creates an exclusive St. Regis blend for all St. Regis properties. The Houston hotel’s most popular request, the St. Regis blend combines Keemun and Ceylon black teas with blackcurrant and bergamot. Other popular blends include Flowery Earl Grey, another black tea blend accented with blue cornflower petals, and Pear Oolong, a semi- oxidized tea flavored with natural essential oils of Bartlett pears. Each tea leaf in this blend is rolled by hand into a tiny pearl that seductively unfurls when placed in boiling water.

To fully appreciate the ritual of afternoon tea, Solorzano and Fortier pair tea and prosecco with a carefully selected assortment of sandwiches, scones and pastries. The menu follows a traditional English fare of sandwiches consisting of cucumber and baby watercress, aged Gruyere cheese with roasted peppers, grilled chicken salad with arugula leaves, smoked salmon with capers, egg salad with dill and pumpernickel, and cured bresaola beef and provolone cheese; blackcurrant scones with Devonshire cream; and three signature pastries. In Fortier’s tenure at The St. Regis Houston, the sandwich menu has only been changed once. While the pastries vary depending on mood and season, the blackcurrant scones remain true to tradition.

Just as the menu follows tea customs reminiscent of afternoon tea in England, so does the tea service. Wedgewood designed all china utilized in the tea lounge. While the china pattern, teapots and strainers are not unique to just The St. Regis Houston, the tea cozies covering the teapots are. The resident seamstress designed the cozies exclusively for tea service, adding yet another dimension to making sure no detail gets overlooked.

In an effort to provide guests with unmatched hospitality, Fortier says he welcomes custom requests. “Sometimes tea service gets booked, but people still want tea. We are happy to provide tea service in the privacy of their room,” Fortier says. “We will also do specific food requests. We will do gluten-free requests, plain scones, and even vegetarian and vegan accommodations when possible.”

In recent years, tea service has grown in popularity with bridal and baby showers. Because tea service is a formal yet relaxing occasion, guests can celebrate milestones while savoring tea and its accompanying treats, and bask in the music of the live harpist. Of course, teatime is not limited to milestones, but open to everyone.

Afternoon tea remains rich in custom and tradition. Its timelessness appeals to everyone and commemorates the world’s love affair with tea. St. Regis stands foremost in preserving the heritage of a ritual first conceptualized almost 5,000 years ago.

Afternoon tea takes place Wednesday through Sunday from 3 – 5 p.m. Tea service is $39 per person, plus tax and gratuity; reservations are strongly recommended. Call 713-403-2631. 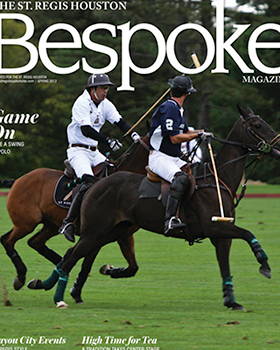 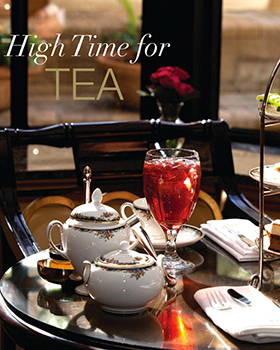 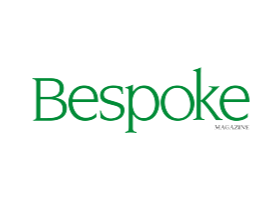